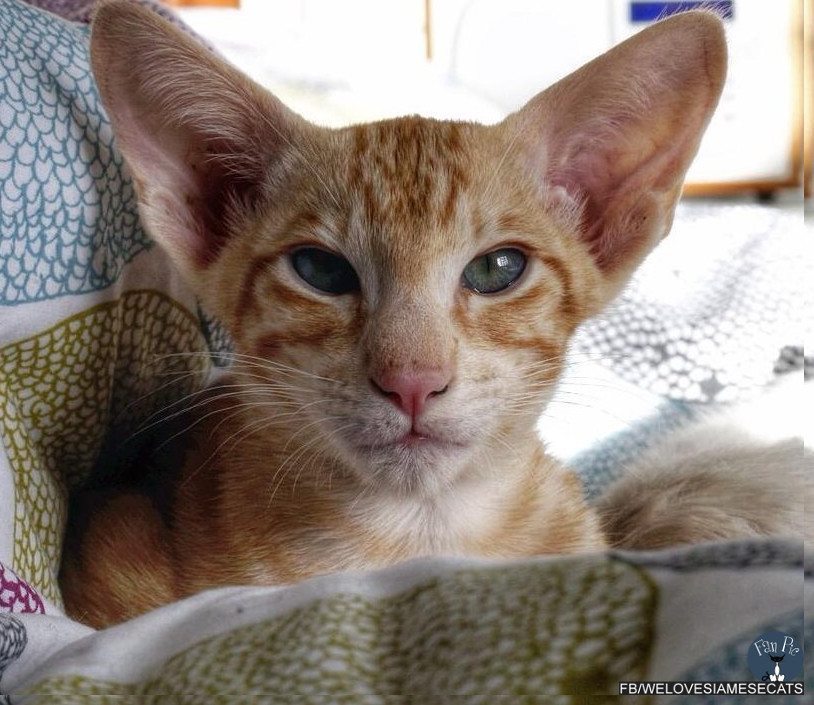 The Oriental Shorthair and Longhair were founded from Siamese with the intention of exploring the many color and pattern combinations beyond points.

During the 1950s in England, breeders with pedigreed Orientals were scarce. Consequently, Russian Blues, British Shorthairs, Abyssinians, and others were crossed with Siamese cats, and the non-pointed offspring were crossed back to Siamese in order to rebuild the breed.

They were imported into the United States in the 1970s, when new crosses with American Shorthairs created even more varieties. In this way, cats that are amazingly similar to Siamese in body type and temperament were created, but they come in a rainbow variety of colors! Pointed cats are still produced in OSH litters and are considered to be part of the Siamese gene pool. 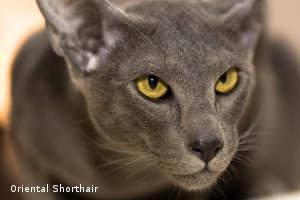 The coat of the shorthair is glossy and lies close to the body while the longhair has a semi-long coat, also close-lying.

They are quite social and like lots of activity, and they don’t tend to do well in single-cat households. However, some may become very bonded to their owners, so much so that they are shy around strangers. As with Siamese, they are intelligent, curious, vocal, and will fetch toys and walk on a leash.

Two special types of Oriental Shorthairs are Foreign Whites and Havana Browns. Foreign Whites are essentially pure white Siamese cats, and they have brilliant blue eyes as opposed to green.

White Domestic Shorthairs were crossed with seal point Siamese, and because the blue eyes come from the Siamese heritage, these cats are not deaf. The white coat, however, is dominant over the pointed coat genes. This is the only Oriental breed that cannot be mated with other Orientals–only Siamese. In particular it is not allowed to mate two Foreign Whites, as this could increase the incidence of Waardenburg syndrome (blue eyes related to deafness).

Havana Browns, with their glossy solid mahogany coats, share their early English history with the other Oriental types, but once they arrived in the United States they developed a different head shape.

Although breeders in the U.S. originally crossed Havana Browns with Siamese and Russian Blues, outcrossing was prohibited in the 1970s. This had the unfortunate result of severely reducing the gene pool, so in the late 1990s outcrossing was again permitted–this time to black and blue domestic shorthairs along with some Oriental Shorthairs. Some cat fancy associations consider the Havana a separate breed.