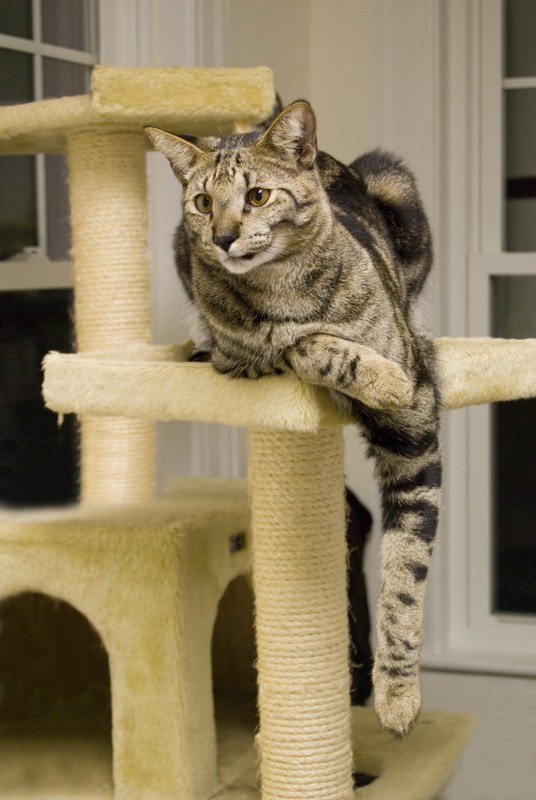 The Savannah is one of the newest recognized breeds and unusual in that it is a cross between a domestic cat and a wild cat. Initially in 1986, Judee Frank bred a male Serval, a medium-sized wild African cat, with a domestic seal point female Siamese cat.

Suzi Woods, who owned both the Serval and the resulting hybrid female kitten, documented the cross and attracted the interest of Patrick Kelley and Joyce Sroufe who are credited with developing the breed standard.

The International Cat Association accepted the breed for registration in 2001 and gave it Championship status in 2012, but the Cat Fanciers’ Association does not yet recognize the Savannah as a breed.

There is a lot of variation in the appearance of Savannah cats, in large part due to the percentage of Serval genes. The higher the percentage, the larger the size and the more “wild” the look. Males are larger than females. The breed standard for coat color and pattern calls for brown or silver spotted tabby, black, and black smoke. However, this also varies depending on the domestic cats used in the crosses.

The domestic outcrosses for the Savannah breed that are permissible are the Egyptian Mau, Ocicat, Oriental Shorthair, and Domestic Shorthair. However, some Savannah breeders use “impermissible” breeds or mixes, such as Bengal (for size and spotting) and Maine Coone (for size), and these outcrosses can bring many unwanted genes.

The first few generations of male hybrids are not fertile, though females are fertile from the first generation on. Outcrosses are rarely used these days as many fertile males of later generations are available; therefore many breeders are exclusively breeding Savannahs to Savannahs.

Savannahs are more social than typical domestic cats, and they are often compared to dogs. They can be trained to walk on a leash and play fetch. They get along well with other pets, but early exposure to people and animals is key to sociability. Savannah Cats are also well known for their jumping ability and love of water.

They are quite expensive, especially early generation hybrids, due to the significant difference in gestation periods and sex chromosomes between the Serval and a domestic cat. Pregnancies are often absorbed or aborted, or kittens are born prematurely. Servals can be picky in choosing mates, and often will not mate with a domestic cat unless they have been raised alongside domestics.

Hopefully that helps you to understand this unusual and interesting breed. And while the Savannah is not truly a Siamese, it is a descendant  so we hope it would interest any lover of the Siamese.