Balinese cats are essentially long-haired Siamese cats, and in fact were originally known as “long-haired Siamese.” These cats have been known since the 1920s, as occasional long-haired kittens were produced in a Siamese litter. They were not shown but only sold as household pets. 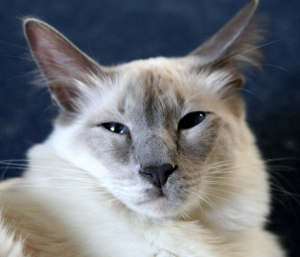 However, 30 years later two breeders, Marion Dorsey of Rai-Mar Cattery in California and Helen Smith of MerryMews Cattery in New York, decided to start a breeding program for long-haired Siamese.

The name was changed to “Balinese” to reflect the gracefulness of Balinese dancers, and the breed quickly became popular. As more breeders worked on the Balinese cats, two types emerged, mirroring the two main types of Siamese cats: traditional applehead and modern wedgehead. Appleheads are popular pets, but judges prefer the modern type–hence this is the breed standard.

Like the Siamese, the Balinese has a long, athletic body, wedge-shaped head, and bright blue eyes. The coat is short in comparison to other long-haired cats–more medium length–and does not form a ruff. Also like the Siamese, most associations accept the full range of colors: the four traditional point colors of seal, blue, chocolate, and lilac, plus the less traditional colors such as red and cream, and patterns such as lynx (tabby) point and tortie point. However, the Cat Fanciers’ Association accepts only the four main Siamese colors; all other colors and patterns are considered Javanese.